In 1924, Jean Patou famously launched a campaign to hire four American models for his Parisian couture house. He was eager to stress "the exquisite desirability of both the rounded French Venus and the slender American Diana,” an allusion to the Roman goddesses of love and the hunt, respectively. Patou’s Venus was the traditional couture client, who lived a life of leisure, while his Diana was young, athletic, and unapologetically modern. Patou’s search was certainly a shrewd marketing stunt, but also reflected the economic influence of the American consumer and their preference for sportswear-based designs. In the aftermath of the First World War (1914-1918), the United States enjoyed a period of economic prosperity that made the latest French fashions more accessible to American consumers than ever before. Fashion trends cycled quickly as women adopted garments and accessories that reflected the rapidly changing role of the fashionable woman. Short skirts and bobbed hair were pivotal to the creation of this modern identity and reflected a rejection of the gender norms of the previous decade. Determined to defy expectations and "burn the candle at both ends," young women embraced dancing, smoking, drinking, gambling, and sports in a flurry of exuberance that became known as the Jazz Age. 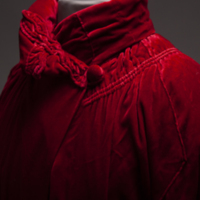